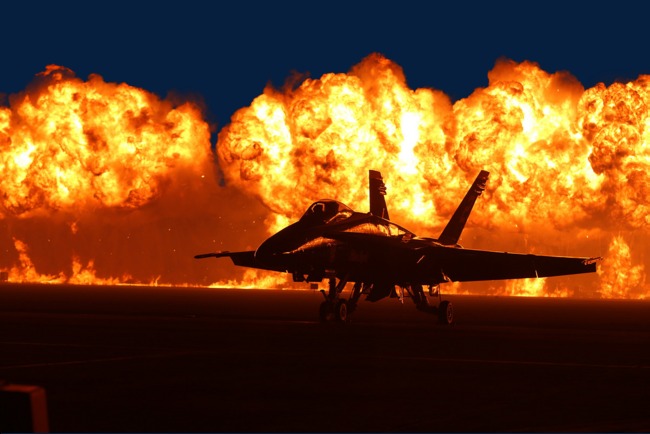 At the beginning of the month (May 2018) the British Ministry of Defence seemingly on accident revealed for the first time that they are unloading horrifyingly inhumane, thermobaric weapons out of drones onto the people of Syria: and it wasn’t even in this recent April 2018 escalation of tension, but last year. They are doing it more often than they’d like to admit.

Somehow the use of thermobaric weapons seems less humane than ripping a person to shreds with shrapnel.

The weapons work by igniting oxygen surrounding the weapon.

A cloud of explosive chemicals is released, and upon impact the fuel-air mixture is detonated, exploding the lungs of animals and human beings in the vicinity, not damaging structures much but filling the lungs of all animals with fuel and burning them in what may be one of the most horrifying ways imaginable to die. A May 1st Freedom of Information Act disclosure from the British Ministry of Defense revealed that during the first couple months of 2017, combat drones fired 19 AGM-114N4 Hellfire missiles.

Little else about casualties or even the purpose of these strikes was revealed. An organization called Drone Wars is to be credited with this remarkably important discovery through their FOIA request, they reported on it first.

Multiple times in the past the United States has used thermobaric weapons, the first nation to ever do so. Russia has also used them and invested a lot in their production.

These weapons rupture organs and do a lot of unsettling things to say the least. A descriptionof them reads:

“Their medical effect is principally primary blast and they affect organs where  there is a tissue interface of varying densities, such as the lungs,  bowel and inner ear. Damage manifests itself in the severity  and onset  of occurrence, depending on distance from the blast and  orientation of the victim, and can be diagnosed by simple investigative techniques.”

According to a 2000 report from Human Rights Watch, when it comes to thermobaric bombs “the [blast] kill mechanism against living targets is unique and unpleasant… What kills is the pressure wave, and more importantly, the subsequent rarefaction [vacuum], which ruptures the lungs.”

“If the fuel deflagrates but not does detonate, victims will be severely burned and will probably also inhale the burning fuel. Since the most common [fuel-air explosive] fuels, ethylene oxide and propylene oxide, are highly toxic, undetonated FAE should prove as lethal to personnel caught within the cloud as most chemical agents,” HRW continued.

UK has long refused to say if it uses #thermobaric weapons, and US UK media and NGOs have long condemned alleged use by Russia. But now UK govt has let slip that not only is UK using them in #Syria, but that they comprise 25% of all UK drone missiles firedhttps://dronewars.net/2018/05/02/mod-accidentally-reveals-british-drones-firing-thermobaric-missiles-in-syria/ …

The Ministry of Defence has revealed for the first time – seemingly accidentally – that British drones are firing thermobaric weapons in Syria.  The disclosure comes in an Freedom of Information (F…

As the United States burned civilians in entire villages to death with napalm during the Korean War, they developed early thermobaric weapons, fuel-air explosives in the 1960’swhich they used in the Vietnam War for killing people and detonating entire minefields.

In the mid 1990’s, Russia used fuel-air explosives against Chechens, and in 1999 they used one TOS-1 Buratino against Grozny, the Chechen capital with the Buratino shooting rockets equipped with thermobaric payloads at targets residing in the city.

Russia has also been accused of using thermobaric weapons in Syria. In the war in Afghanistan, the US used thermobaric bombs in alleged attempts to kill Taliban forces and Al-Qaeda in caves.

The bottom line is, we’re severely disconnected from empathy, from feeling the reality that our own governments are using weapons against other innocent people that are no different than us: horrific, nightmare weapons.

Weapons that rupture lungs and organs, weapons that fill the lungs with fuel and burn them, weapons that bring death about in the most horrific and painful way possible have been used against the enemy and any civilians in the vicinity for decades upon decades, and it’s still going on. So when they talk about disarming us, remember you’d be giving up your guns to a regime that has no problem exploding the lungs of people in other countries.

„Russia is breaching international conventions by dropping incendiaries similar to white phosphorus on to residential neighbourhoods in the Syrian city of Aleppo in what is thought to be the prelude to a ground assault to retake the city from rebel forces.“

Censor.NET reports referring to The Times.
„Photographs have also shown what experts believe to be a thermobaric bomb, the most powerful explosive apart from a nuclear weapon, being detonated next to urban areas, with potentially devastating effects for civilians.“
„I’d say thermite is worse than white phosphorus as it’s extremely difficult to put out,“ Eliot Higgins, founder of Bellingcat, an investigative journalism website, who identified the weapons, said. „We have seen these munitions used before in the conflict, since late 2012. But the interesting aspect (in these recent attacks) is that Russia appears to be the one dropping them.“

„Thermite is only the latest banned or restricted weapon to be deployed by the Kremlin in Syria. There have also been reports of cluster munitions – bombs that break up in the air into smaller incendiaries that can cause death and injury over a wide area – since Russia entered the conflict on President Bashar al-Assad’s side last September,“ The Times notes.
Although Russia is not a party to the Convention on Certain Conventional Weapons, it is a signatory to the Geneva Convention banning the use of incendiary weapons off the battlefield, according to the article.

Russia has not signed the Convention on Cluster Munitions, but it does not mean that their use should not be investigated, Andrew Smith, a representative of the Campaign Against Arms Trade said, adding a stronger political will is needed to stop those atrocities and abuses. These weapons are not just deadly but also have an indiscriminate effect, he noted.