BEAUTY SECRETS OF THE SPIES

KINCENTIAL SCIENCES, a company with an innovative line of cosmetic products marketed as a way to erase blemishes and soften skin, has caught the attention of beauty bloggers on YouTube, Oprah’s lifestyle magazine, and celebrity skin care professionals. Documents obtained by The Intercept reveal that the firm has also attracted interest and funding from In-Q-Tel, the venture capital arm of the Central Intelligence Agency.

The previously undisclosed relationship with the CIA might come as some surprise to a visitor to the website of Clearista, the main product line of Skincential Sciences, which boasts of a “formula so you can feel confident and beautiful in your skin’s most natural state.”

Though the public-facing side of the company touts a range of skin care products, Skincential Sciences developed a patented technology that removes a thin outer layer of the skin, revealing unique biomarkers that can be used for a variety of diagnostic tests, including DNA collection.

Skincential Science’s noninvasive procedure, described on the Clearista website as “painless,” is said to require only water, a special detergent, and a few brushes against the skin, making it a convenient option for restoring the glow of a youthful complexion — and a novel technique for gathering information about a person’s biochemistry.

In-Q-Tel, founded in 1999 by then-CIA Director George Tenet, identifies cutting-edge technology to support the mission of the CIA and other intelligence agencies, and provides venture funding to help grow tech firms to develop those solutions.

“Our company is an outlier for In-Q-Tel,” Russ Lebovitz, the chief executive of Skincential Sciences, said during an interview with The Intercept. He conceded that the relationship might make for “an unusual and interesting story,” but said, “If there’s something beneath the surface, that’s not part of our relationship and I’m not directly aware. They’re interested here in something that can get easy access to biomarkers.”

Still, Lebovitz claimed he has limited knowledge of why In-Q-Tel selected his firm.

“I can’t tell you how everyone works with In-Q-Tel, but they are very interested in doing things that are pure science,” Lebovitz said. The CIA fund approached his company, telling him the fund shares an interest in looking at DNA extraction using the method pioneered by Skincential Sciences, according to Lebovitz.

The CIA fund has described human skin as a “unique, underutilized source for sample collection.”

Beyond that, Lebovitz said he was unsure of the intent of the CIA’s use of the technology, but the fund was “specifically interested in the diagnostics, detecting DNA from normal skin.” He added, “There’s no better identifier than DNA, and we know we can pull out DNA.”

Perhaps law enforcement could use the biomarker extraction technique for crime scene identification or could conduct drug tests, Lebovitz suggested.

Carrie A. Sessine, the vice president for external affairs at In-Q-Tel, declined a media interview because “IQT does not participate in media interviews or opportunities.”

(Officials at the venture capital firm have, in fact, given interviews in the past.)

Though In-Q-Tel operates in the open, it has often kept key details of its activities out of public view, beyond required annual reports. After aSecureDrop source told The Intercept about a gathering in San Jose for In-Q-Tel executives and start-up companies backed by the fund, The Interceptattempted to attend, but was denied access.

The shroud of secrecy around In-Q-Tel belies a 17-year effort to build ties between the CIA and the biggest names in Silicon Valley. Gilman Louie, a video game executive known for publishing best-sellers such as Tetris, Falcon, and Civilization II, was brought on as the first chief executive of In-Q-Tel. The popular mapping tool Google Earth was created around technology developed by Keyhole Corp., an In-Q-Tel-backed company that was later acquired by Google. 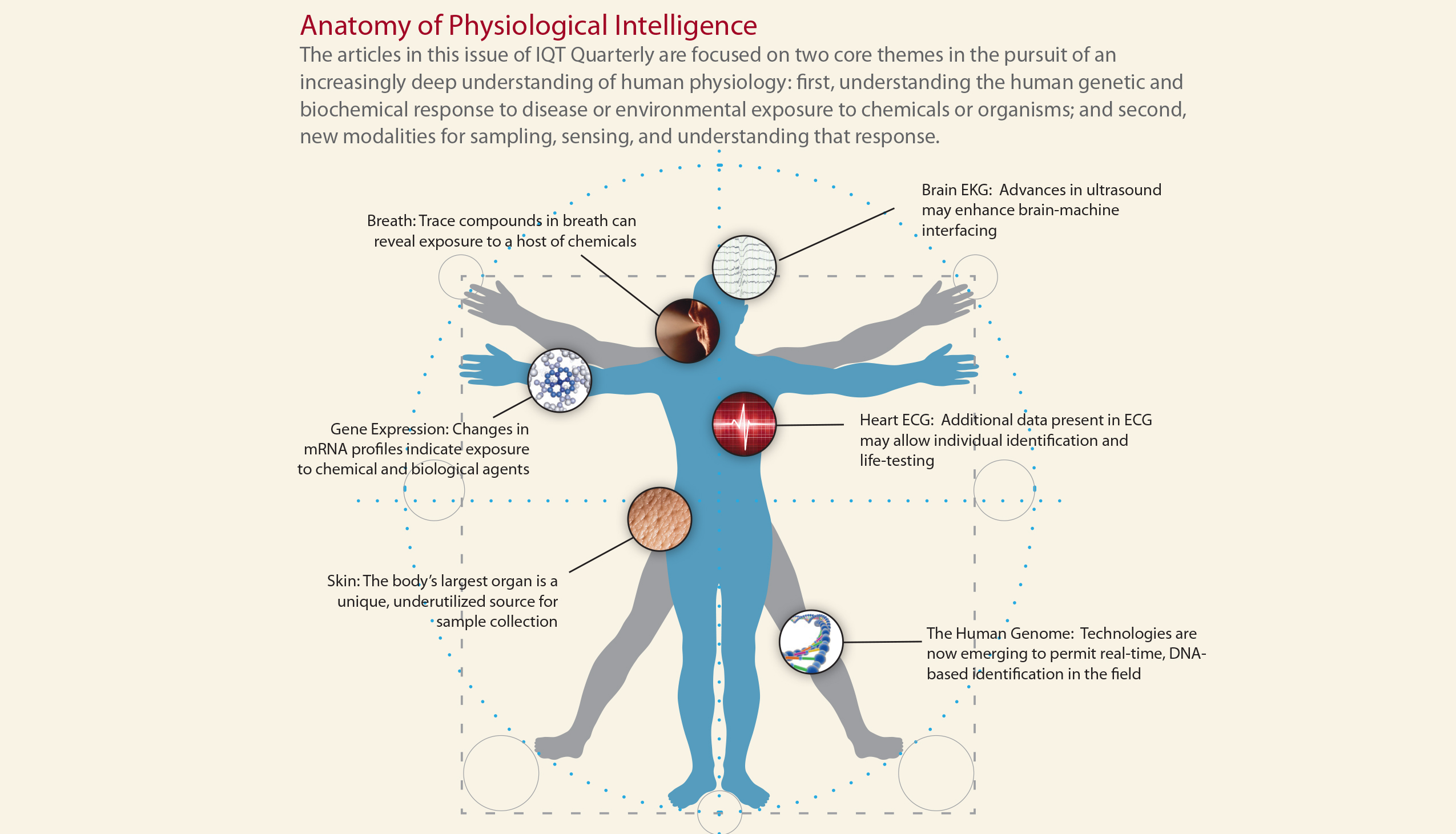 A graphic from the “IQT Quarterly” summer 2010 issue on the new modalities in sampling and sensing collection.

Still, little is publicly revealed about the use of In-Q-Tel-backed ventures and their relevance to the goals of intelligence agencies. Many of the fund’s investments are not publicly revealed. The fund is reviewed by the CIA’s inspector general and reports directly to the Senate Select Committee on Intelligence, which frequently conducts business through classified briefings.

David Petraeus, while serving as the director of the CIA in 2012, remarked, “Our partnership with In-Q-Tel is essential to helping identify and deliver groundbreaking technologies with mission-critical applications to the CIA and to our partner agencies.”

Despite the association with computer and satellite technology, In-Q-Tel also maintains a long-running interest in developing advanced genetic analysis, biological technologies for detection and diagnostics, as well as research into what is known as physiological intelligence, which, in a 2010 article, the fund described as “actionable information about human identity and experience that have always been of interest to the Intelligence Community.”

The article, which is no longer available on the fund’s website but ispreserved by a cache hosted by the Internet Archive, argues that advances in medical research into biomarkers can be leveraged by intelligence agencies for a variety of uses, from airport security to next-generation identification tools.

A diagram in the article calls human skin the body’s largest organ and a “unique, underutilized source for sample collection.” The author, Dr. Kevin O’Connell, then a “senior solutions architect” with In-Q-Tel, notes, “The DNA contained in microorganisms in a person’s gut or on a person’s skin may contain sequences that indicate a particular geographical origin.”

A screen grab from the Clearista website describing the resurfacing process of its product.

In-Q-Tel has invested in several companies working in this realm, in addition to Skincential Sciences. In 2013, In-Q-Tel publicly announced a strategic partnership with Bio-NEMS, a firm that developed a semiconductor device used to analyze DNA for a variety of diagnostic and human identification applications. Claremont BioSolutions, a diagnostics firm, and Biomatrica, a firm that specializes in preparing biological samples for DNA testing, are also backed by In-Q-Tel.

Skincential Sciences did not start out as a beauty company. The firm was founded in 2010 as DX Biosciences, which was developed around a patent by a team of scientists including Dr. Samir Mitragotri of the University of California, Santa Barbara. Mitragotri has published research into the use of biomarkers as a “window to body’s health.”

The company gained early backing from Frontier, a venture capital company, among other investors.

While the technology has potential for a variety of medical diagnostics, including early melanoma detection, Lebovitz said the company quickly realized it had immediate value as a cosmetic. The application of the detergent developed by the firm could be used easily to diminish blemishes and dark patches on the skin. And unlike similar treatments at aesthetic spas, the technology developed by Dr. Mitragotri and his colleagues did not require acid or any discomfort.

In 2013, the firm relaunched and recapitalized as Skincential Sciences, with Clearista as its primary brand of beauty products.

Lebovitz says he intends to continue developing the technology so that it may be medically relevant, but he is also focusing on breaking into the multibillion-dollar skin care market. While Skincential has won measured success for its Clearista brand products by landing coverage ontelevision and through social media, the company has not yet been able to compete with mainstream skin care companies.

Jamie Walsh, a blogger who runs Glam Latte, a beauty website, endorsed a Clearista product on her YouTube channel, noting that with only one application of the cream, her skin improved and was “glowing.” Walsh said Skincential Sciences sent her the product for a testimonial, and noted that like many independent brands, she did not know about the company’s funding.

Skincential hopes to license its product with a major distributor, or even one day become acquired by a larger beauty company. “We’ll take any of those,” said Lebovitz.

The chief executive noted that he is proud of the In-Q-Tel support, calling the fund “great partners.”

“Not only was I the odd man out,” Lebovitz said, “but almost every woman at the conference wanted to come up to me to talk about skin care.”