Turkish police fired tear gas and used water cannon on a crowd to forcibly enter the country’s top-selling newspaper on Friday after a court ordered its confiscation.

An İstanbul court appointed trustees to take over the management of the Feza Media Group, which includes Turkey’s biggest-selling newspaper, the Zaman daily, as well as the Today’s Zaman daily and the Cihan news agency, dealing a fresh blow to the already battered media freedom in Turkey.

Police in riot gear pushed back Zaman supporters who stood in the rain outside its İstanbul office where they waved Turkish flags and carried placards reading „Hands off my newspaper“ before they were overcome by clouds of tear gas.

Officers then forcibly broke down a gate and rushed into the building. The footage showed them scuffling with Zaman staff inside the offices. 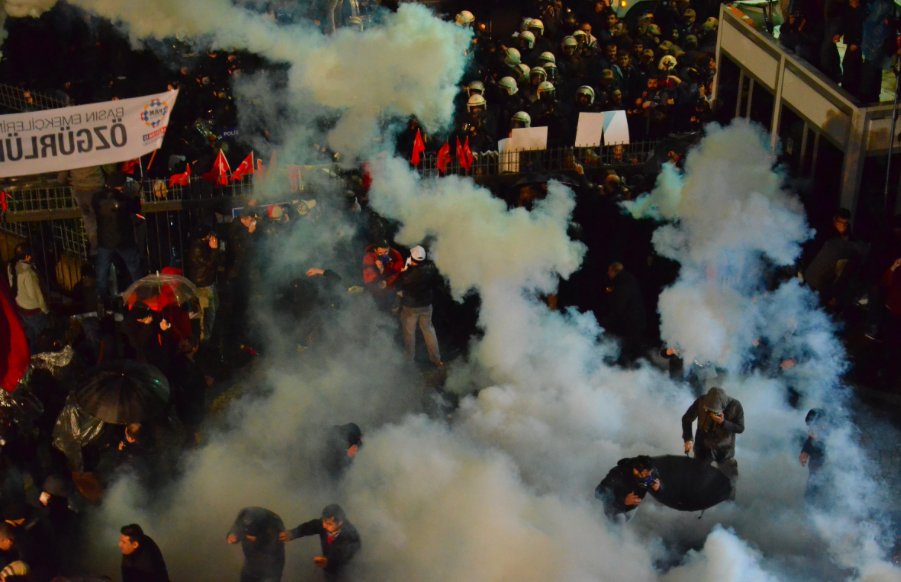 Zaman employees waiting near the entrance said police immediately tear-gassed hundreds of readers who had gathered outside Zaman newspaper to protest the ruling without even delivering the court decision. 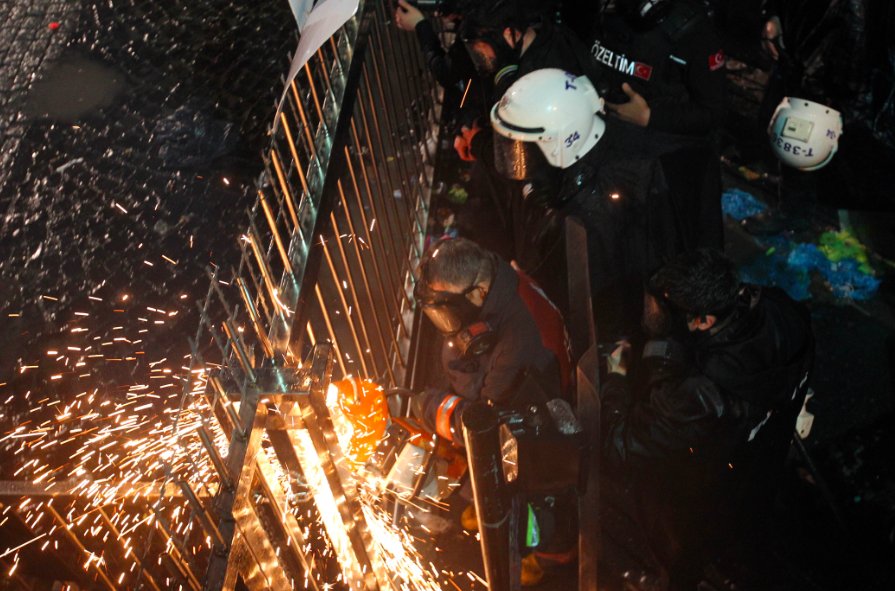 Police use bolt cutter to break the steel gate in front of the Zaman building.

Employees shouted ‚free press cannot be silenced,“ as hundreds of police officers entered the building. Zaman daily Editor-in-Chief Abdülhamit Bilici, who had hard time in speaking due to tear gas that covered inside the building, said the scene will be noted in the Turkish history as a black stain.

Police then went to the management floor in the building. Police initially prevented Bilici from entering his office but they later let him in. Bilici was heard saying he does not recognize the court decision.

Live footage also showed Today’s Zaman Editor-in-Chief Sevgi Akarçeşme being pushed by police. She said a police officer held her arm and tried to take her out of the building. „Police did not let us inside our offices in our own newspaper building! This is pure despotism! They physically blocked me, both men&women,“ she tweeted.

A group of opposition deputies who were also present at the building to show support for the daily were also affected by pepper gas.

Police then broke cameras in the building to cut live footage from the building, an employee said. „Throw him off the staircase“, one police shouted at 2nd floor as one editor was pushed down from the stairs, another Zaman employee tweeted.

The employees were later asked to leave the building. „We are evacuating the building. This is probably my last message from my office,“ Akarçeşme tweeted after midnight.

The decision was issued by the İstanbul 6th Criminal Court of Peace at the request of the İstanbul Chief Public Prosecutor’s Office, which claimed that the media group acted upon orders from what it called the “Fethullahist Terrorist Organization/Parallel State Structure (FETÖ/PDY),” praising the group and helping it achieve its goals in its publications.

The prosecutor also claimed that the alleged terrorist group is cooperating with the Kurdistan Workers’ Party (PKK) terrorist organization to topple the Turkish government and that high-level officials of the two groups have had meetings abroad.

The court decision means that the entire management and the editorial board of Feza Media Group companies will be replaced by the three-member board named by the court.

A crowd of Zaman and Today’s Zaman journalists, readers and supporters gathered outside Zaman’s headquarters as court-appointed trustees were expected to arrive at any moment.

Zaman Editor-in-Chief Abdülhamit Bilici addressed his colleagues on the grounds of the newspaper, calling the court decision a „black day for democracy“ in Turkey as journalists and other newspaper workers held up signs that read: „Don’t touch my newspaper“ and chanted „free press cannot be silenced!“

“Today, we are experiencing a shameful day for media freedom in Turkey. Our media institutions are being seized,” Today’s Zaman Editor-in-Chief Sevgi Akarçeşme said as she addressed the crowd.

“As of today, the Constitution has been suspended,” she said, referencing to the fact that the Turkish Constitution forbids seizure of printing houses and press equipment.

Şahin Alpay, a veteran political expert and a columnist for both Zaman and Today’s Zaman, lamented the situation, saying Turkey is having a “dark day” when one of the most prominent media outlets in the country is being confiscated at the order of a political leader.

“It is utterly saddening, particularly for people of my generation, that Turkey is turning into a third-world dictatorship,” Alpay said.

The takeover of Zaman comes as President Recep Tayyip Erdoğan and the government of the Justice and Development Party (AK Party) that he founded intensified pressure on the Turkish media. Zaman, which is affiliated with the Gülen movement, is one of the few opposition media outlets in the country, which is dominated by pro-government television stations and newspapers.

Turkey‘ satellite provider Türksat halted the broadcast of the independent İMC TV station last week on terrorism charges. Two newspapers and two television stations owned by Koza İpek Holding were placed under the management of a trustee board on charges of financing terrorism in October 2015. Those media outlets were closed down by the trustee board due to financial losses last week.

„This is not a matter of a fight between the government and the [Gülen] movement. This is a matter of existence for Turkey,“ columnist Levent Gültekin said as he joined the crowd outside Zaman in a show of solidarity. „Just a few days ago, they pulled the plug on İMC TV for ’supporting terrorism,‘ which is a massive lie.“

An employee of Zaman newspaper holds a chain during a protest at the courtyard of the newspaper in İstanbul, March 4, 2016. (Photo: Reuters)

Erdoğan declared the Gülen movement, inspired by Turkish Islamic scholar Fethullah Gülen, his number one enemy after a corruption investigation in December 2013 that implicated people in his inner circle. He accused alleged sympathizers of the movement within the judiciary and the police of staging a coup against his rule. The corruption charges were dropped after prosecutors of the case were replaced.

According to the court’s decision three trustees were appointed to the Feza Media Group. One of the trustees is Sezai Şengönül, who serves as an editor at a news website. The two others are lawyers are Tahsin Kaplan and Metin İlhan.

İlhan’s social media accounts showed that he is an open supporter of the AK Party and Erdoğan. His personal Twitter account’s background photo shows Erdoğan and Davutoğlu while some of his tweets even included insults at main opposition Republican People’s Party (CHP).