Iraqi forces have been forced to pause the offensive on the Isis stronghold of Mosul by the “catastrophic” rate of civilian casualties reported in the city.

The US-led coalition is investigating allegations its air strikes killed more than 130 men, women and children as they sheltered in their homes in the western district of al-Jadida.

Central Command confirmed it carried out bombings that “correspond to allegations of civilian casualties” for the first time on Saturday, but insisted the strikes hit Isis fighters and equipment.

Local residents said at least 137 civilians had been killed in a cluster of homes hit on 13 and 17 March, which some reported had previously been used as a sniper position by Isis.

Journalists saw children and a pregnant woman among at least 50 bodies recovered from the rubble, with limbs and shoes protruding from destroyed houses.

Iraqi government forces suspended their six-month advance on Saturday amid growing international pressure over the incident and numerous other allegations of civilian deaths.

“The recent high death toll among civilians inside the Old City forced us to halt operations to review our plans,” a Federal Police spokesman said. “It’s a time for weighing new offensive plans and tactics. No combat operations are to go on.”

Iraqi forces launch push to retake western Mosul from IS

A spokesperson for the US-led Operation Inherent Resolve said an investigation had been opened to determine the “validity” of claims over its strikes and insisted they corresponded with international law.

“The coalition respects human life, which is why we are assisting our Iraqi partner forces in their effort to liberate their lands from Isis brutality,” he added.

“Our goal has always been for zero civilian casualties, but the coalition will not abandon our commitment to our Iraqi partners because of Isis’ inhuman tactics terrorising civilians, using human shields, and fighting from protected sites such as schools, hospitals, religious sites and civilian neighbourhoods.”

The US’ official civilian death toll from the air campaign against Isis in Syria and Iraq stands at 220, although monitors say the real total is far higher. Not-for-profit group Airwars warned this week of “record” deaths as bombing reached unprecedented intensity.

It said the number of reported civilian casualties in coalition strikes has hit 1,000, with allegations accelerating under Donald Trump to suggest “possible key changes in the US rules of engagement that are placing civilians at greater risk”.

The President issued an executive order demanding a new plan to defeat Isis from his military, which arrived on his desk in February but has not been detailed in public.

The UN said it was “profoundly concerned” by the reports emerging from al-Jadida, which it described as “densely populated”.

“We are stunned by this terrible loss of life and wish to express our deepest condolences to the many families who have reportedly been impacted by this tragedy,” said Lise Grande, the Humanitarian Coordinator for Iraq.

“Nothing in this conflict is more important than protecting civilians.

“International humanitarian law is clear. Parties to the conflict – all parties – are obliged to do everything possible to protect civilians.

“This means that combatants cannot use people as human shields and cannot imperil lives through indiscriminate use of firepower.”

Senior Iraqi politicians also expressed concern, with speaker Salim al-Jabouri saying that although MPs recognised the responsibility shouldered by government forces, they must “spare no effort to save the civilians”. 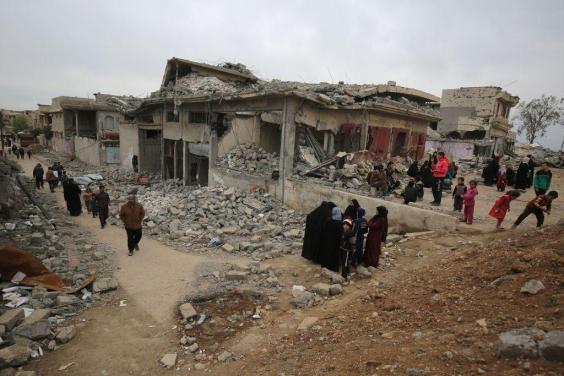 Iraqis displaced by fighting flee to the Al-Sumoud neighbourhood of Mosul on March 22, 2017 (AFP/Getty)

Vice President Osama al-Nujaifi, himself from Mosul, described the al-Jadida strikes as a “humanitarian catastrophe”, calling for an emergency parliamentary session and an immediate investigation into the incident.

Isis has been fortifying Mosul, where leader Abu Bakr al-Baghdadi declared his Islamic State in 2014, for almost four years and its militants are deploying suicide car bombs, mines, booby traps, ambushes, mortars and drones to defend their last city stronghold in Iraq.

Faced with their toughest battle yet, Iraqi and coalition forces have increasingly turned to air strikes and artillery to clear and hold territory in Mosul’s densely-populated western districts.

Progress has faltered in the last two weeks as fighting enters the narrow alleys of the Old City, where thousands of civilians have been fleeing every day.

An army statement published in the al-Sabah state newspaper said that future operations would be carried out by ground troops highly trained for urban combat.

“Our heroic forces are committed to the rules of engagement which ensure protection of civilians” it added.

Fleeing residents have described grim living conditions inside the city, where up to 60,000 people remained trapped, saying there is no running water or electricity and no food coming in.