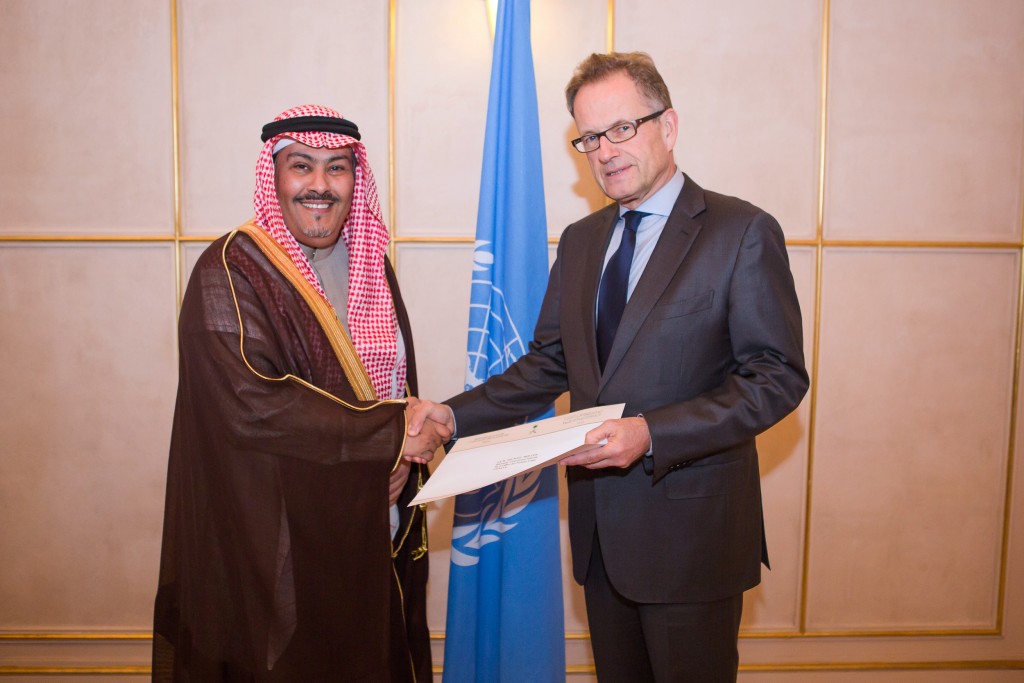 “It is scandalous that the UN chose a country that has beheaded more people this year than ISIS to be head of a key human rights panel,” said UN Watch executive director Hillel Neuer. “Petro-dollars and politics have trumped human rights.”

“Saudi Arabia has arguably the worst record in the world when it comes to religious freedom and women’s rights, and continues to imprison the innocent blogger Raif Badawi,” Neuer added.

“This UN appointment is like making a pyromaniac into the town fire chief, and underscores the credibility deficit of a human rights council that already counts Russia, Cuba, China, Qatar and Venezuela among its elected members.”

Above: Ensaf Haidar, the wife of jailed Saudi blogger Raif Badawi,
today criticized the election of Saudi Arabia as Chairperson of
the UN Human Right Council panel, saying the decision
is “like a green light to start flogging Raif Badawi again!”

According to UNHRC documents obtained by UN Watch, Saudi Arabia was chosen to head a 5-member group of ambassadors, known as the Consultative Group, which has the power to select applicants from around the world for more than 77 positions dealing with country-specific and thematic human rights mandates.

“The UN often describes these experts as the ‘crown jewels’ of its Human Rights Council, yet the world body only undermines their legitimacy by picking a fundamentalist theocracy that oppresses women and minorities to preside over the experts’ appointment.”

A UN report dated September 17th reports that Faisal Trad, Saudi Arabia’s envoy to the UNHRC, was selected to chair the panel for appointments to be made in the current 30th session of the council, which opened on Monday and will last for another two weeks. The Saudi ambassador was first elected to the post ahead of the recent June 2015 session, yet Geneva diplomats chose to keep silent and that initial election went unreported until now. 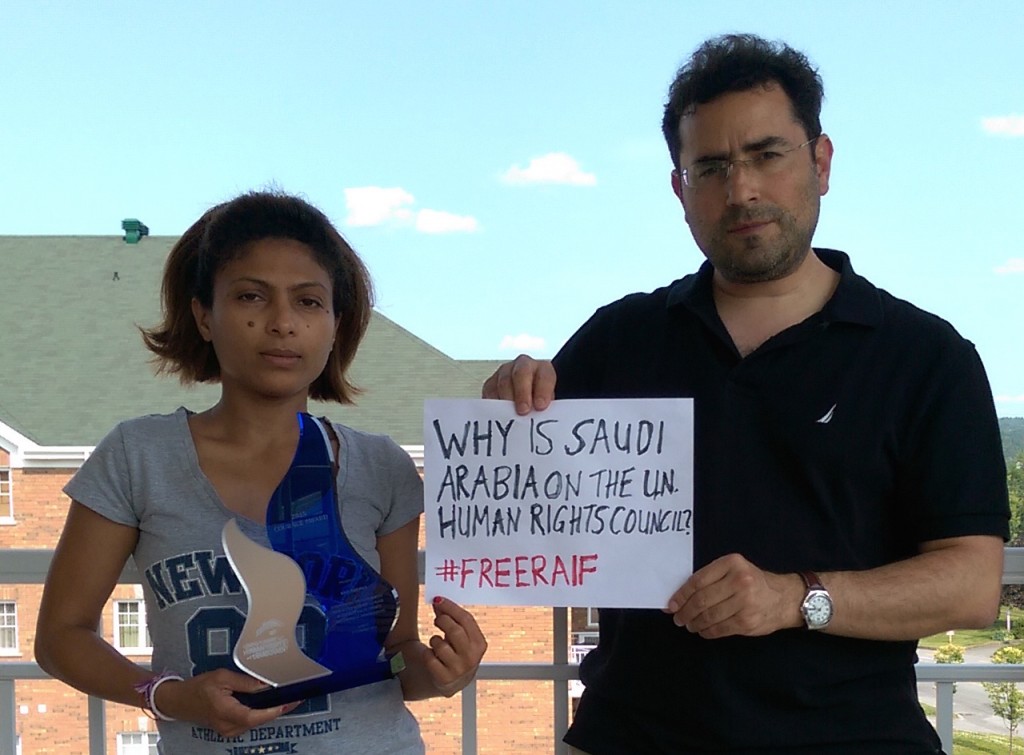 Neuer expressed concern that the Saudis may have been handed the position in a backroom deal, in exchange for dropping the regime’s controversial bid to become president of the entire 47-nation council. “I urge Ambassador Power and High Commissioner Mogherini to confirm that this is not the case,” he said.

U.S. & EU Were Silent When Saudi Arabia Was Elected to UNHRC in 2013

“We cannot forget that the U.S. and the EU refused to utter a word of protest when weurged them, together with Saudi dissidents, to oppose the monarchy’s election in 2013. It’s a sad comment on our world that oil continues to trump basic human rights principles.”

“It’s bad enough that Saudi Arabia is a member of the council, but for the UN to go and name the regime as chair of a key panel only pours salt in the wounds for dissidents languishing in Saudi prisons, like human rights activist Raif Badawi.”

The United Nations is coming under fire for handing Saudi Arabia a key human rights role even though the Kingdom has “arguably the worst record in the world” on freedoms for women, minorities and dissidents.

Critics, including the wife of imprisoned pro-democracy blogger Raif Badawi – sentenced to 1000 lashes for blogging about free speech – say that the appointment is “scandalous” and means that “oil trumps human rights”.

Mr Badawi’s wife, Ensaf Haidar, who is leading an international campaign to free her husband, said on Facebook that handing the role to Faisal bin Hassan Trad, Saudi Arabia’s ambassador at the UN in Geneva, was effectively “a green light to start flogging [him] again”.

UN Watch, an independent campaigning NGO, has discovered that Mr Trad, Saudi Arabia’s ambassador at the UN in Geneva, has been elected as chair of a panel of independent experts on the UN Human Rights Council. 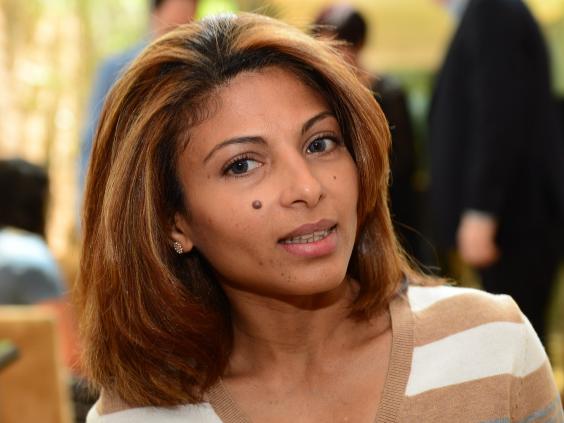 As head of a five-strong group of diplomats, the influential role would give Mr Trad the power to select applicants from around the world for scores of expert roles in countries where the UN has a mandate on human rights.

Such experts are often described as the ‘crown jewels’ of the HRC,according to UN Watch, which has obtained official UN documents, dated 17 September, confirming the appointment.

UN Watch executive director Hillel Neuer said that the appointment, made in June but unreported until now, may have been a consolation prize for the Saudis after they withdrew their bid to head the 47-nation council following international condemnation of the kingdom’s human rights record.

The Saudis’ bid emerged shortly after it posted a job advertisement for eight new executioners, to cope with what Amnesty International branded a “macabre spike” in the use of capital punishment, including beheadings, this year.

The HRC, the UN body responsible for promoting human rights around the world, has long been the subject of criticism for granting membership to countries with dubious human rights records. As well as Saudi Arabia, current members include China, Qatar, Russia and Venezuela. 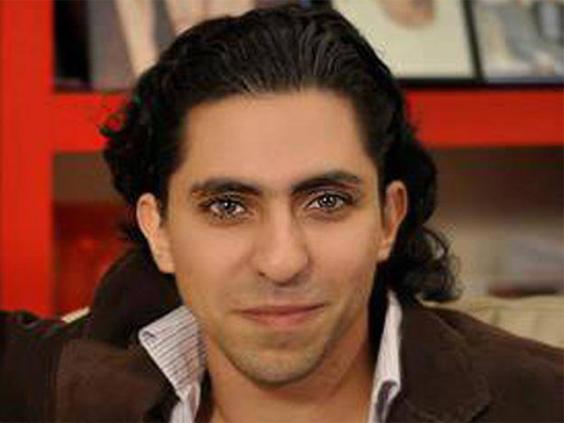 Raif Badawi has been sentenced to 1,000 lashes for ‘insulting Islam’ on his liberal website

He added: “Saudi Arabia has arguably the worst record in the world when it comes to religious freedom and women’s rights, and continues to imprison the innocent blogger Raif Badawi.